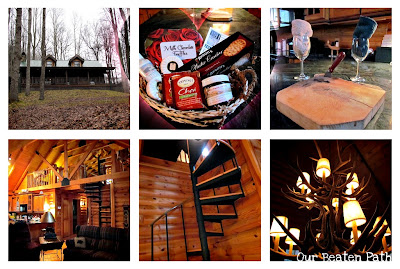 February 3, 2011 my husband and I celebrated our 5th wedding anniversary. We decided to do something special and away from the kids for once. Don't get me wrong. We love vacations with the kids...Camping is the best. This needed to be something a little different though. We pulled up after a little ride in the mountains **lost...or well we took the long way-thanks to me** and WOW! I was blown away. This place was so welcoming and peaceful. When we walked in the first thing I noticed other than the fact that the inside of the cabin was absolutely gorgeous was that she left us a little anniversary basket full of hot teas, crackers, pepper jelly, some wine glasses, and a box of chocolates. This place stole my heart from the get-go. 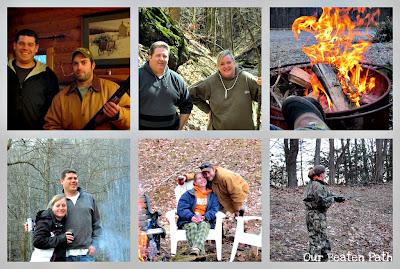 Our first thought was, "we're going to get away from everybody and everything and enjoy our anniversary to ourselves." The more we thought about it though the more we wondered why we would want to stay in this big cabin all alone. The more the merrier, right!? So we invited all the siblings that live somewhat close to us. Not everyone was able to come but we had a blast with those who did. 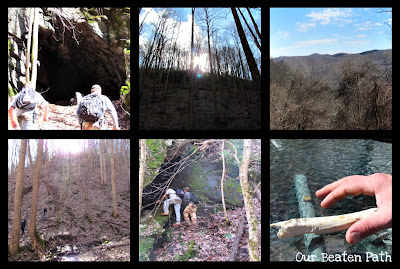 This cabin was sitting all alone on 200 acres of land! Let's hike!!! We went up and down and around the mountain. I was so sore the next couple of days. It was so fun. Along the way we found some fresh bear droppings and then moments later ran across an animal bone that had obvious teeth marks. Maybe chewed on by a bear....!? Eeeek. Who knows. I do know at that point I was ready to head back up to the cabin to enjoy the fire pit and hot tub.

This anniversary was more than I could ever have imagined. It really opened up my eyes just getting away from the kids for a few days and enjoying some time was my husband. With that being said, I've decided to back off of the blog some. I just simply don't have time. Working full time, taking care of two rowdy little boys, and then still spending time with the hubs...There just aren't enough hours in the day. I used to sit over at my computer every night while he watched his TV...and some nights we would talk back and forth but other nights we would feel worlds away.
I'll still be around. I love reading blogs and we have several trips planned for this year. I still want to use this as a little "journal of our life" that I can print at the end of each year. It just won't have all the moments in between...Every time.
Now after all that, Goodnight! I'm off to eat dinner and spend a little time with the family.
Posted by Our Beaten Path at 6:39 PM